Sky Summit is the first map in Temple Run 2. It was available right after the app's launch date, January 2013. It was the only map in the game until December 2015, when Frozen Shadows was released. In the Chinese Version, Sky Summit is very different as it is green and has 2 versions. The Day & Night Versions.

In the map selection screen. 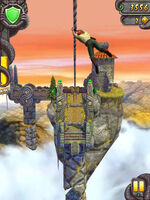 Hanging on a zipline.

The artifacts in Sky Summit.

Community content is available under CC-BY-SA unless otherwise noted.